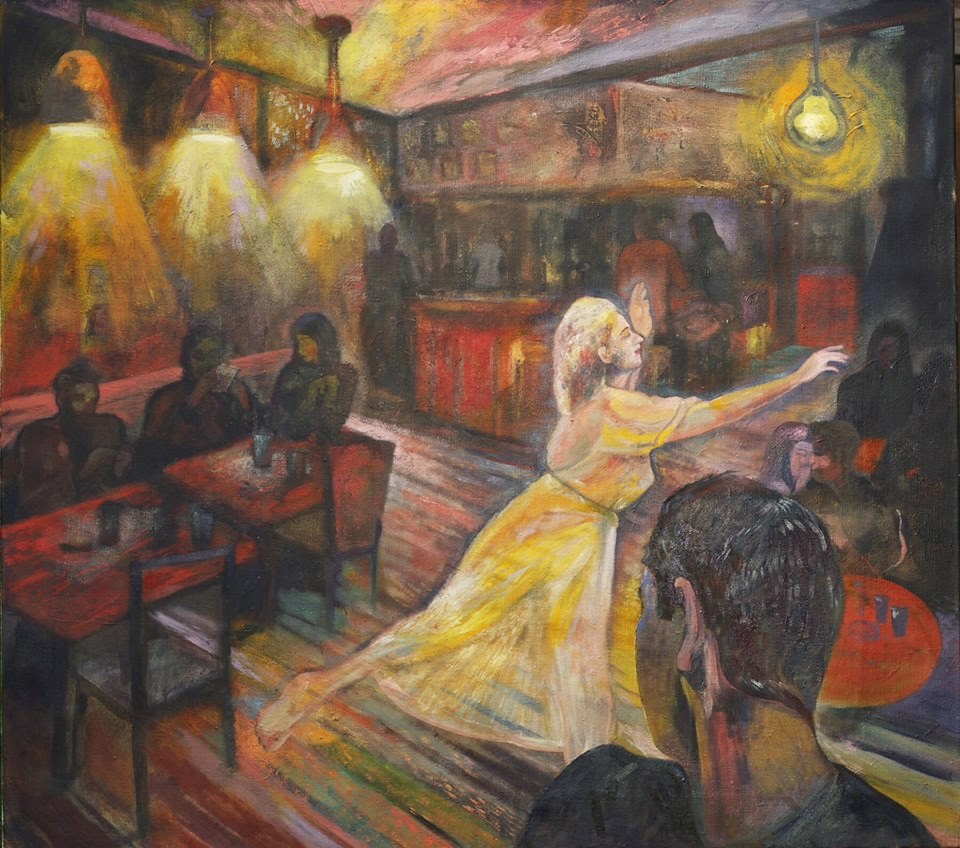 Dancing With Sylvia
Your words sink to the asphalt,
evaporate.
And would they ever,
the things you say,
Harden and congeal?
In promises?
In secret pacts?
Surely, such abstract signs and sounds
Leave your tongue bereft of meaning
puddled lamplit
hush of your intention—shadows, shadows.
I could tell you,
Their flesh bears no substance.
Dark curves of letter, the lengthening vowel
haunting constant,
dark shadow on canvas.
The stars
Have such a gap to fill.
Such emptiness, blackness.
Would that your meanings erupt
Wet and molten
dorsal bone
Jutting, broken
Breaking through the scaly skin of language—
Fire-crested.
Woe to me,
who am instead
witness to
These dead, these sacrificed
Rising up like bile, like black tidewater.

About the Poet:
Elizabeth Johnston teaches writing, literature, and gender studies at Monroe Community﻿ College in Rochester, NY. Her scholarly work centers on representations of female sexuality in literature, television, and film and has been published in a number of academic journals and edited collections, most recently in Disjointed Perspectives on Motherhood (Lexington Books, 2013). Slated for publication are three additional essays in Mythology and Modern Women Poets: Analysis, Reflection & Teaching (MacFarland, 2014), The Eternal Internal Gender Wars of Our Sisters (KH Publishing, 2014), and SLI: Studies in the Literary Imagination 47.2 (Spring 2015). Likewise, her fascination with representations of gender infuses her creative work; since 2011, her poetry has appeared in a variety of print and online journals and edited collections, most recently New Verse News (April 2014) and Mom Egg Review (April 2014). New poems written by Elizabeth will be featured in forthcoming issues of NonBinary Review, The Luminary, and Rose Red Review, and in the print anthology, Veils, Halos, and Shackles: An Anthology of International Poetry (Eds. Charles Fishman and Smita Sahay). She is a founding member of the Rochester-based writer’s group, Straw Mat and facilitates writing workshops at the Breast Cancer Coalition of Rochester. She lives in North Chili, on the west side of Rochester, with her partner, Brian, two daughters, Ava and Christina, and a menagerie of animals.
﻿Website:  http://strawmatwriters.weebly.com/elizabeth-johnston.html


About the Artist:
'Deaths and Entrances' An exhibition of paintings and prints by Dan Llywelyn Hall